A Spanish ham, is a Spanish ham, right? Turns out that not all cured Spanish ham, or jamón, are created equal. It’s a real challenge to find jamón (ham) in the U.S. and there’s a lot of confusion surrounding the difference in varieties; luckily, we’ve been around jamón our whole lives and are working with experts in Spain to feed you the best possible ham around, the Jamón 100% Ibérico de Bellota. So, what’s the difference between this ham and another? Why is Jamón Iberico de Bellota the best? Let’s find out.

The Serious Business of Spanish Jamón

We Spaniards take our ham seriously. The differences amongst ham names are not just creative marketing ploys, they’re government regulated titles. There’s even lengthy number of government manuals full of the various restrictions, from the breed of the pig to the amount of time each is cured. It’s essentially the Holy Ham Bible.

Food and beverage quality regulation is serious business in Europe and there is nothing comparable in the U.S. Yes, there’s the FDA that monitors food safety, but this is a different ball game. For example, you can only call a Champagne a Champagne if it comes from the region of Champagne, France. Or a Spanish Rioja Reserva must be aged for at least a year and a half to maintain its status as a “Reserva.” The same goes for jamón. Like wine regions, Spain has protected jamón regions, or D.O.Ps (Denominaciones de Origen Protegida). Artisans have to follow specific regional regulations to produce and sell their ham under the name “Serrano,” “Ibérico,” or “Pata Negra.” Ibérico Club ham, for example, is from a D.O.P called “Los Pedroches” and is the only ham with a Protected Denomination of Origin in the United Sates.

And if that wasn’t convincing enough, an auditing agency that functions a lot like the ham police, visits each producer to make sure they’re following the rules and getting the proper results. Luckily for us, that means nobody will gimmick you into buying a lesser quality jamón. The ham police does all the work for you.

What is Jamón Serrano?

“Serrano” comes from the word “sierra,” meaning mountain, as they were originally cured in the breeze of fresh mountain air. Now with modern technology, ventilation replicates this mountain breeze.

This somewhat inexpensive cured ham can be made from a few different breeds of white pigs (Duroc or Duroc Jersey). The pigs, like most factory-farmed animals, eat a grain-based farm feed (cebo), and not much else. Feed and a factory-farmed life is a much cheaper way to keep these all-day eaters fed. They may munch on a few natural grasses here and there, but their meals aren’t as regulated like other pigs.

What is Jamón Ibérico?

There are a few classifications within Jamón Ibérico, each tagged with a different color. The classifications (white, green, red, and black) are determined based on the percentage of Ibérico pig in the breed and what the pig eats.

The general Ibérico pig eats a lot like the pigs used to make Jamón Serrano: grain-based farm feed, but with the occasional chance to munch on a few acorns and grasses the last couple weeks of its life. These pigs may live a free-range life but not always. In the case of the Pedroche D.O.P., farmers are allowed anywhere from 2-12 pigs per hectare (about 2.5 acres) of land, depending on the classification.

Unlike Jamón Serrano, the Ibérico ham must come from pigs that contain at least half of Ibérico pig in their breed. This particular pig is native to the Ibérico peninsula (think Spain and Portugal). It’s a black breed that’s slightly larger than most, with a pointed snout, short black hair, and fine bone structure. The Ibérico pig is part of what makes Spanish jamón so distinct and quintessentially, well, Spanish. So when you’re trying to determine the difference between Ibérico and Serrano, remember that it’s all about the breed and Ibérico is best.

There’s one final tag given only to the best Ibérico pigs: the black tag. If you thought the classification for Jamón Ibérico was tough, the black tag is so hard to come by that only .01% of pigs can actually be called “Pata Negra.” “Pata Negra” or “black hoof” refers to the black hooves of these Ibérico pigs. The white pigs actually have white or lighter colored hooves. Unlike the general Ibérico ham, the Pata Negra breed is 100% Ibérico making it 100% native to the area. We Spaniards are so adamant about this distinction that pig farmers and curers are required to comply with frequent genetic testing of their pigs. In come the ham police! 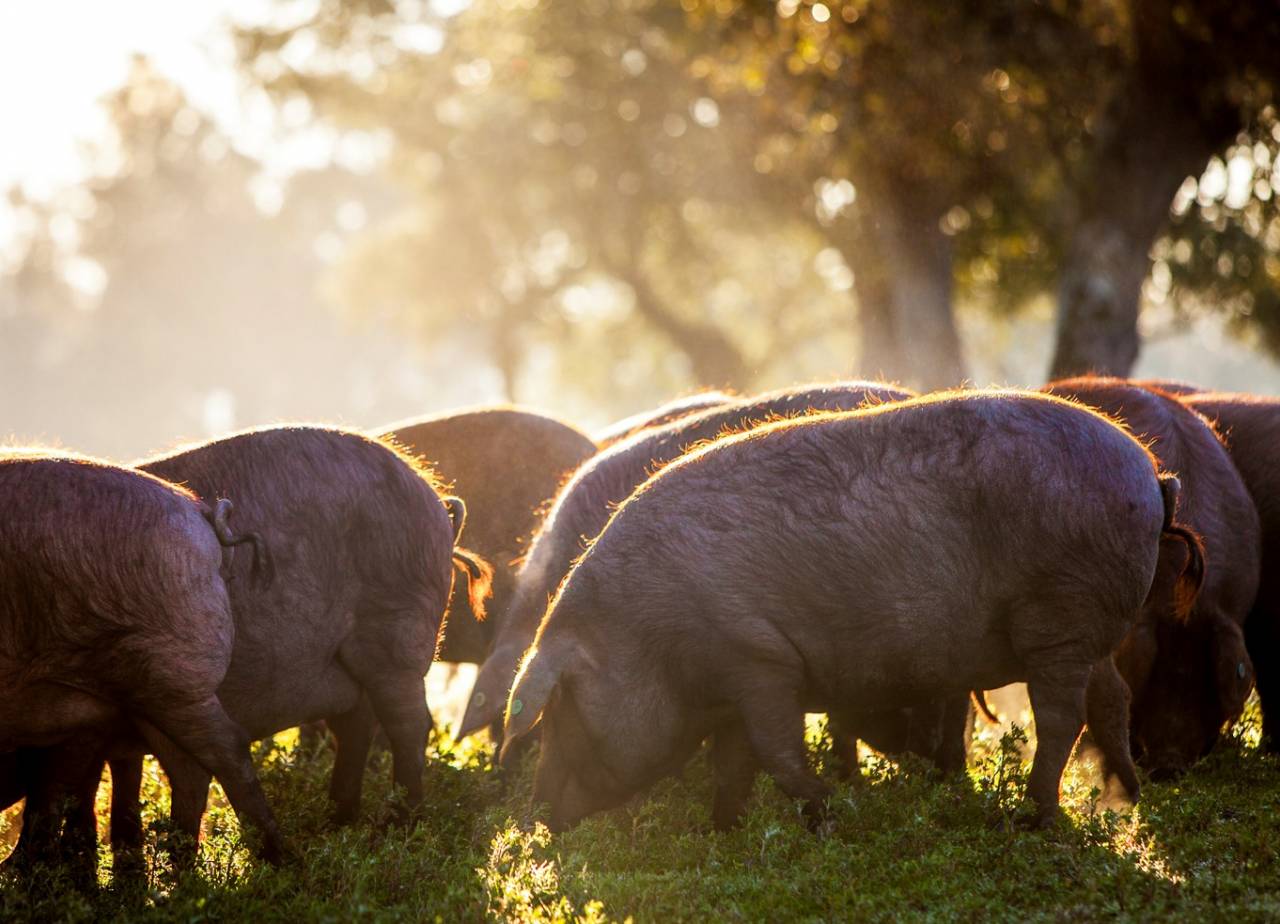 But it’s more than just the breed. These pigs spend their days roaming through vast pastures (dehesas) and lush oak forests, with only one pig allowed per hectare of land. You’ve got a beautiful, lush hectare of land? Well, you’ve only got enough space for one single Jamón 100% Ibérico de Bellota, according the D.O.P of Los Pedroches.

And what does this particular breed of pig snack on all day? Acorns. Yes, you heard us right! Bellota, meaning “acorn,” is the primary food for the Pata Negra. You thought all pigs ate slop? Let the Jamón Ibérico de Bellota show you and other pigs how it’s done. These guys and gals get to sit under the shade of ancient Spanish holm oak trees, picking up every acorn in sight. They also roam around their large plots of land and eat whatever natural grasses and roots they can find.

These special Jamón Ibérico de Bellota pigs are raised humanely, without antibiotics, GMOS, hormones, or artificial enhancements. Snacking stress-free in Spanish pasture all day? Sounds like a pretty great life to us.

The phrase “pig out” didn’t just come from anywhere. Pigs of all varieties eat constantly, and they’ll eat practically anything in sight, so they’re ideal for cleaning up weeded fields and ripping up tough invasive plants. Because of their ferocious appetite, it’s crucial that they eat the cleanest and organic material. This prevents diseases and produces the highest quality meat. Pigs get all their necessary nutrients from their natural habitat, keeping them healthy and active during their lives.

The addition of acorns to their diet is key. They fatten them up naturally and healthily and give Jamón Ibérico de Bellota a distinct nutty flavor. The acorn-based diet also gives these pigs a greater percentage of unsaturated fat, and a cholesterol count that’s lower than many types of lean meat, including chicken and turkey. An Ibérico pig must eat between 1,000 and 1,200 pound (ca. 544 kilogram) of acorns to be considered a true “de Bellota!” If a farmer decides to give the pigs feed for a couple of weeks, those pigs can now no longer be called 100% Ibérico de Bellota. It’s how all farm animals lived before farming was industrialized, and we want to keep it that way. No messing around here.

How long does it take to make a Jamón Ibérico de Bellota?

These hams take longer to make than many bottles of expensive wine. The process is slow and methodical, and necessitates a lot of care. To start, the pigs live in the pasture about a year and a half before they’re brought in to be cured. After butchering, artisans submerge the hams in salt, rinse them carefully, and place them in a refrigerated space during a 60 to 90-day period. During this time, the salt distributes itself evenly and the meat begins to rehydrate and preserve. Artisans monitor the conditions rigorously throughout the curing process, increasing the temperature and humidity over time. Once they reach ideal temperature and humidity, the artisans move the hams into a natural drying cellar called a “bodega.” They stay in there anywhere from six months to a year before they reach a specific texture, cure, and flavor. Later, they hang the jamón in a curing cellar to age until the Maestro Jamonero, or “ham master” decides, through a series of aroma and touch tests, that the jamón is perfectly cured. All said and done, the curing process alone can take up to four whole years!

Can I really taste the difference between Jamón Ibérico de Bellota and other cured hams? 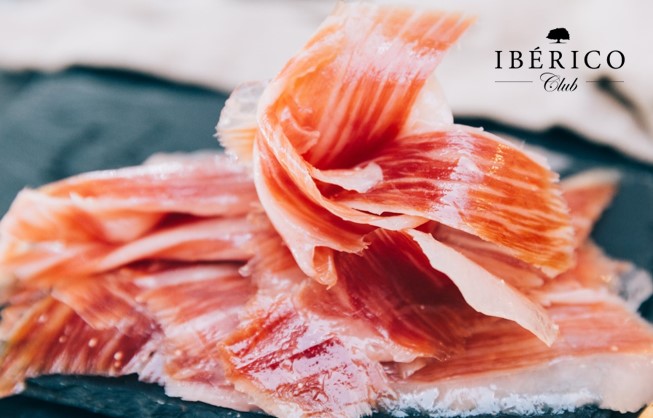 The difference amongst cured hams is unprecedented. Though Jamón Serrano and Jamón Ibérico are still fantastic Spanish products, the Jamón 100% Ibérico Bellota (Pata Negra) has unmatchable quality, flavor, and texture. You’ll notice a distinct marbling and a creamy rim of ivory white fat that glistens as it comes up to room temperature. The dark red flesh is soft and tender from the pig’s stress-free environment and is speckled with tiny white crystals of protein, indicating proper curing methods.

At the end of the day, the aromas and flavors are what really wows us. The jamón is soft, sweet, and salty. We say that you can tell you’re eating a true Pata Negra by the way the fat coats your throat as it melts down into your belly.

As jamón connoisseurs, you get why the Pata Negra is known as the best ham in the entire world. Each bite of jamón deserves the utmost respect. Dedicated farmers and artisans spend their whole lives learning how to properly, raise, cure, and even carve this unique delicacy. So take a bite, close your eyes, and let the taste of the Spanish dehesa melt into your mouth.

‣ For the best Jamon 100% Iberico de Bellota in the USA, visit us here.

‣ The Guide to Storing and Preserving Jamón Ibérico

About the Author
Megan Lloyd
Chef and Food Writer

The best pairing
for your Jamón Ibérico de Bellota

Add a bag of Traditional Gourmet Picos Camperos (1oz) for only

SHIPPING: It's 100% free and it takes 3 business days (occasionally it could take a few days longer). Orders placed before 11:59 am will ship the same day. After that, the order will ship the next business day.

RETURNS: We will refund 100% of your purchase for ANY reason. No questions asked. If you try any of our products and don't like it for any reason, we will send you a pre-paid return shipping label and refund your money.

Apply now and we'll open a professional account with special prices for you in a few minutes.

At Ibérico Club we are committed to our wonderful food lover community!

We are OPEN and following all the CDC Guidelines for the Covid-19 (SARS-CoV-2) Pandemic.

All our office staff is safe, healthy and working remotely. Our warehouse team is also healthy and going through temperature controls 2 times a day. They are safely keeping the chain moving and daily preparing all the orders to be sent to your door. Our products are in Florida and continue to have 3-day Free Shipping to all States. Please allow one or two more days in some cases during these days.

According to the FDA there is no evidence of food, food containers, or food packaging being associated with transmission of COVID-19.

But there's a fresh batch coming in very soon!

Please leave your email to receive a DISCOUNT CODE and we'll let you know as soon as the product arrives at our warehouse.

OTHER DELICACIES ON SALE TODAY!